My Fitness Journey 2013a

This summer I will journey to find great fitness experiences.... other than my own AWESOME boot camps!

I want to see who can truly make me SMILE. While on this journey, I will share with you my experiences, so you can form your own opinions. The purpose of my quest is not only to continue my education, but to see what's really out there in terms of proper fitness and health education. I want to see how I measure up against the competition and provide you with the most current and up to date activities and options in fitness.

My mission is to offer people a NO EXCUSES approach to becoming fit and healthy, with the utmost regard for their safety, health and enjoyment, where other methods have previously failed. In exercise and fitness, if you don't love it, like it or love to hate the experience, you are not going to continue with it! My purpose is to positively influence and expose as many people as possible to the benefits of proper health and fitness education. I truly want to educate and motivate you to want to get fit! For me, exercise is not work. It is an enjoyable experience that requires much effort, but offers great rewards in return. Some of these rewards are health, happiness, peace of mind, mental toughness, physical fitness, a natural high (endorphins) and a SMILE! On June 8, 2013, I will begin my mission and write a weekly blog about my encounters. I will even bring friends along with me on some of my adventures. Finally, I will include some of your favorite at home fitness programs that you have always wanted to try... but have not - due to that ever-plaguing EXCUSE. .... So follow me, ask me questions, or join me, as I will periodically announce stops on my fitness journey.

When it's all said and done, I will have created the ultimate experience to help you ....

On Saturday morning at 8:30, I took a CXWORX class at Merritt. This class was a 30 minute, non-stop, power packed workout. Upon entering the room, the instructor knew that we (my partner in crime - my sister) were new comers and suggested an appropriate resistance band based on our upper body strength. Note to self: Avoid the yellow band! OUCH!! (just kidding). For this class you need a mat, resistance band and/or weight and a towel - all of which are provided for you.

We got there early, which was great because the class filled up quickly, with a variety of people. There were men, women, young and old who came to participate. It was really a family environment like Cheers... where Everybody Knows Your Name. Before the class began, the instructor gave specific instructions to recruit your core and use proper posture doing the series of exercises. Once the class started, it did not stop. There were no rest breaks and transitions were fast.

The instructor, was knowledgeable, comical, personable and offered options, which is important for people to go at their own pace. The workout consisted of continuous ab work including a variety of different crunches, toe taps, plank work and resistance band work. By the end of the 30 minutes, my abs and arms were ON FIRE! As a motivator, the instructor completed every aspect of the workout with the participants, and offered great music to keep you going. The clock also motivated me, as I thought... "I can do anything for 30 minutes!"

On Thursday evening, I took Bikram Yoga.... Enough said!! Just kidding. While I am no stranger to hot yoga, I was found this class to be more physically and mentally exhausting than my usual hot Vinyasa. I had heard so many wonderful testimonies and tributes to this class, so of course I had to make it a stop on my fitness journey. Before taking this class, I visited the website... which I would strongly suggest that anyone new to this do. They keep you well informed and tell you exactly what you will need for the class. At first, I thought the disclaimer was a bit overwhelming; however, having taken the class, it was Right On Time!

I was impressed altogether with the teacher! She was very confident, encouraging, knowledgeable and stern as she called out the movements verbally walking you through each breadth, movement and transition. She knew the large class of members by name and would verbally give positive reinforcement if someone was doing well.

While I was prepared for the movements of the class, (I executed pretty well... I think) I was not ready for the HEAT!!! Even though I was forewarned and prepared, I still wasn't ready for a 105 degree room. While in the class, I was reminded of a boot camp and the military. "It is a very specific 90 minute series of 26 yoga postures and breathing exercises." Everyone moved together as instructed while movements were called out and told to "hold" or "change" or "reach". I loved the synchronous movement! We were encouraged to push through and make it to the water break, as part of this discipline is to complete the cycle of movements. If you needed a break, of course you could take it! I found myself pausing in child's pose one or two times to regroup. Throughout the class, you are instructed and encouraged to look at the mirror to keep you focused. The mirror ROCKS! It shows you exactly what you look like and allows you to see yourself making adjustments, corrections and changes. By the end of the class, I was drenched, exhausted and proud! I had worked every muscle in my body and challenged my mind as well. I felt a sort of accomplishment with the completion of this class like never before.... 90 minutes is a long time!

Shortly after the class was over, I felt a feeling of total relaxation. I felt great, refreshed and renewed. My eyes were open and my mind was clear. Now I didn't feel this sense of Euphoria during the class, but afterwards the feeling was AMAZING! If you dare to Bikram, remember to adhere to the rules and to drink lots of water! Bikram - that's HOT STUFF!

On Wednesday, I decided to do an at home workout that was passed on to me from one of my SMILERS. This quick but 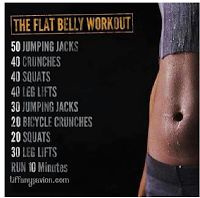 This workout is pretty straight-forward and to the point. I tried it one day after it was sent to me via text message... Thanks Koya. However, the first time I tried it, it was too late for me to add the 10 minute run. Even without the run... it was serious and I felt my muscles working!!

So on Wednesday, June 19, I decided to do the entire workout... with the run. I did my run first to get warmed up and to burn it up before I tone it up. After my run, I went straight for it, and decided to time myself. It took a little less than 10 minutes to complete the circuit of exercises. When I was done, I was sure to stretch so I could elongate and recuperate my worked muscles. I really liked this little quickie. I felt great, challenged and motivated to complete it. I later explored the website that is at the bottom of the workout, as I was intrigued about the creator and her mission. It reminded me of SMILE4Fitness and my mission and purpose for doing this "Fitness Thing". By now, you're on the edge of your seat thinking, "What is the workout?" Well here it is... given to you just as I received it. Try it out. But, don't forget the run. Altogether, you're looking at about 20 minutes. Have fun!

On Thursday I was invited to accompany a coworker to her first Pilates class. I was very excited as I had taken classes infused with Pilates as well as many "On Demand" Pilates workouts. It's definitely different in person. When we arrived to the class the instructor, who was substituting for the actual teacher, had started the class early. So we had to jump right in. As both Melissa and I are pretty fit, we were ok with jumping right in. To our surprise, this CORE laced class was more challenging than we thought. The class moved fast, and while there were traces of yoga... It's very different!! You have to be very aware of your CORE and understand how to activate and recruit your CORE. The transitions were quick and effective. While we did not perform large amounts of repetitions of each exercise, we made every rep count and it was felt from my legs to my arms.

The instructor with the soothing voice did the workout with the class. I appreciated this as I often do the workout with the class as well, to provide a reference and a visual aid. She used certain terminology that was specific to Pilates. Some of which I had heard... some of which I was not familiar. I found myself searching for verbal feedback to ensure that I was doing the movements correctly. Melissa did great for her first class.! Having taken yoga classes really aloud her to adjust to the Pilates style of class. Not to mention she runs marathons for fun.

All in all, I will definitely take another Pilates class. I definitely want to learn more about Pilates and its principles. I appreciate any form of exercise where you train your CORE and focus on posture while toning. We worked hard in the class, yet there was not much sweating... This was good since we took the class on our lunch break! Talk about NO EXCUSES!!

Fall in Love with Fitness