My Fitness Journey 2013b

Back from Vacation!! On Wednesday I took ZUMBA® Fitness with my colleague Kirsten. You knew when she walked in the door that the class would be bananas! Right from the beginning, you knew you were going to sweat, work and ZUMBA!! This 4th of July themed class was filled with dances, music and moves that incorporated CORE work and body toning... in addition to its promised CARDIO-BLASTING!

The instructor, as colorful and vibrant as her outfit, gave you non-stop movements of samba merengue, cumbia, salsa, and reggaeton, and EVEN... Belly dancing! And we can not forget the winding and ticking (my personal favorite) :-). Kirsten did every dance showing variations in levels for those who wanted to kick it up a notch or keep it back a bit! Did I mention she's a former professional dancer??!! Her energy level made the class exciting, motivating and just plan old fun! She also kept track of her calorie expenditure to see how many calories were burned from this workout.

The class participants ranged in age with students of all levels and experiences. Kirsten was knowledgeable, informative and an EXPERT at her craft! She made sure everyone was comfortable, encouraged and had a good time. We even had a soul train line to "Living in America" to keep the party and the theme going! And, I won a prize for knowing what muscles I was working. By the end of the class, the instructor had burned over 500 calories! Judging by my soaking wet clothes and hair... I think I was close behind. The workout included a great warm-up, cool down and stretching session... which was much needed. I learned some new moves (that I will be practicing later... lol) and had so much fun. This workout was AWESOME! A great way to pick back up on My Fitness Journey-- NO EXCUSES!

On Saturday morning, I took my two favorite people with me to CrossFit - my husband and my sister! On the strength of my little fitness angel (Thanks Jen), we signed up for the free introduction class at Athletic Asylum. The introduction class gives you a taste of what goes on in a CrossFit session. The place was AMAZING, a nice wide open space with all kinds of Fitness contraptions, ropes hanging, big boxes, etc. When we walked in a class was going on in the back. The women and the men were doing the same things... just on their own levels! Our instructor explained to us the class structure, membership, and the intensity that is CrossFit. He was extremely knowledgeable about fitness, the body and this style of exercise. Everything was thoroughly explained, taught and demonstrated before we tried it. (Just how I teach my classes!) We did some basic movements such as box jumps, wall balls, kettlebells and sit-ups in this introduction class. After we practiced each movement, he put together a quick workout consisting of all that we had learned. This workout was done in intervals of 30 seconds, switching from station to station with no rest between transitions. At the completion of each round, we got a 30 second rest... IT WAS AWESOME! Although challenging, I completed this workout with ease. I felt great and wanted more. I was ready to climb the rope!! (But I think that's part of the next class: FUNDAMENTALS). This workout did just what it was supposed to do... make me thirst for more crossfit! My travel buddies loved it too! They absolutely felt the workout and loved the experience. I was impressed with the design of the program. They teach you in stages and, they promote success! They don't just want to BREAK YOU DOWN... their goal is to BUILD YOU UP! I absolutely can not wait to go back for the next level of classes... CrossFit certainly made me SMILE!

It has been a while since I reported about my fitness journey! Over the last two weeks life has been filled with ups and downs, smiles and frowns; however, I will not make Insane Lazy Excuses for Fitness... because I still SMILED through it all! My newest venture in my fitness journey is to practice and train for my very first 5K run. ... Yes it's my first... despite what everyone is thinking!! While I have attended a 5K, walked in a 5K... and yes I actually hosted my own SMILE4Fitness 5K; I have never actually RUN a 5K before. So when the opportunity presented itself... (thanks again to my awesome co-worker Melissa) I had to say YES. No more EXCUSES!! I run all the time, but as a sprinter, I never go beyond my 1.5 mile standard distance. Every now and then... I may challenge myself and push it to 2 miles...(RARELY).

Over the past two weeks I have been running and mentally telling myself to just go for it. And finally on Saturday, July 27, I just went for it. I completed my first 5k run/walk in a time of 33.30. During this run, I was fine physically, but mentally, I told myself it's ok to walk. I ended up walking about .5 of a mile sporadically. I was proud but disappointed... total OXYMORON. Afterwards for two days straight, my legs were on FIRE. Not sense my old track and field days have I felt pain like that from running.

So I set out to do it again on Monday, July 29. This time I ran the entire 3.1 miles and I did not stop! Thank goodness for Destiny Child's Song "Survivor". That song got me back home, as I was determined to do it. ...And I did it in 32 minutes this time. The race is tomorrow, Friday evening, August 2, so I will not do a full 5k again until then... I need to preserve strength. But of course I'm going to get my workout on... strengthening my core, working on my flexibility and focusing mentally with some Yoga!! I am so excited to see how it will all turn out. Of course I'll keep you posted, and I'll be back in action exploring all that is fitness and fun next week. I've been invited to a "Butts and Guts" class!! ... I can't wait for that one!

On Friday, August 2, 2013 I ran my first 5K!! After a full day's work, and not knowing what I had gotten myself into, I completed second leg of the Back on my Feet 3 x 5K relay. This awesome event was held at Druid Hill Park. And while I have been to Druid Hill and attended functions and events at Druid Hill... I had never run the Hills of Druid Hill. I choose second leg so that my team mates could help guide me before and after I ran... and because I was a little late getting to the race to run first :-(. I thought I was prepared with my sunglasses, my ear buds, my new running app (RunKeeper), my fabulous socks and of course my winning SMILE!! Note to self... Don't download and try a brand new app 30 minutes before the race!! By the time I got there my running mates, Melissa and Monica (both Marathon runners) were geared up and ready to go! They so graciously allowed me to join their team. In all my preparations to get prepared... I left my sunglasses and my ear buds home!! (How in the world would I do this without the proper musical influence???)... and my AWESOME APP wasn't working because I neglected to set the settings!! So I was running this thing cold turkey with no real distraction to stay focused..... I said to myself... "I hope everyone likes gospel music!" Because I was going to play my playlist by hook or by crook! Fortunately, no one paid me much mind... They were too busy passing by me (lol).

As Monica (first leg) was finishing the race, I felt complete nervousness and anxiety as she was running towards me. We gave a high-five as a handoff, and I took off. Passing by my oh so faithful husband and host of friends and supporters of Monica and Melissa, I knew that it was do or die. I cranked up my music and thought.. this isn't so bad.. That was until my APP lady told me that I had ran 0 distance over 5 minutes.. (darn GPS settings)... As I continued to run, I noticed how beautiful Druid Hill is. I also noticed how HILLY and NEVER-ENDING it is. The helpful folks along the way gave us water and made sure that we were going in the right direction. I couldn't help but think... "Am I anywhere near the finish line?"... That was 15 minutes in when the APP voice told me that I had completed 0 miles over 15 minutes (a bit discouraging I'd say.) At 20 minutes I begin thinking "I want to stop! Where is the finish line?" and "REALL 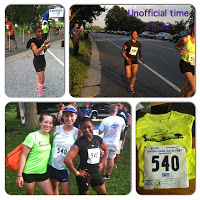 Despite the whining, minor obstacles and set-backs and the... I have no idea what I'm doing... IT WAS WORTH IT! I am so proud that I completed the race and so grateful to Melissa for thinking of me.. and to Monica for letting me join your team!! Even though it hurts me "I SMILE"

On Wednesday, August 7, I took Butts & Guts! I had been waiting all summer long to take this 25 minute class of craziness!! I was joined by my fitness Jen and Dawn - two fitness crazed chicks who are down for anything fitness!! Both Jen and Dawn had been working out prior to this quick class. I was fresh and ready for anything.

The instructor was sharp, witty and quick. Even with a boot on her foot, she managed to do parts of the workout and still be a "drill Sargent". The only equipment needed for this class was an optional set of dumbbells. The workouts start very quickly with jumping jacks, butt kicks and high knees! We did a series of plank work, sit ups, lunges, and squats. Each circuit was repeated. Just as I was getting into the workout, the class ended. It was so fast, that I didn't have time to adjust to working out.

I enjoyed the class; however, I wanted a little more. This class would be a great addition to a previous cardio workout. It could also be a precursor to an individual workout. I had fun, especially since I was in such good company. While my journey must come to an end... As long as I SMILE4Fitness, I'll always win!!

Fall in Love with Fitness